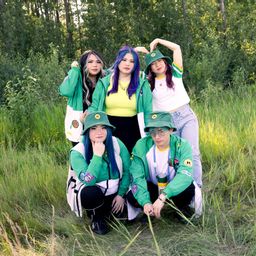 KREW is a Canadian-based YouTube group consisting of five members: Rainbow, Gold, Funneh, Lunar, and Draco. Primarily known for their gaming videos, they have amassed over 11 billion views and collectively reached over 16 million subscribers to date. Their video content style is upbeat and light-hearted. They often focus on creating positive and fun experiences for their community known as KF. Following their efforts, they have successfully launched their own clothing line KREW DISTRICT and app game KREW EATS.